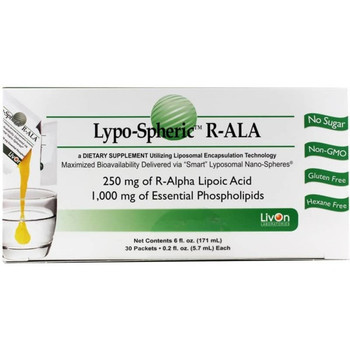 Most of us don't think about each of our 100 trillion cells in our journey to be vibrantly healthy, but the foundation of creating vibrant health is at the cellular level.

Imagine a nutrient that regenerated the livers and saved the lives of patients with terminal liver
damage told by their doctors they would surely die within 2 weeks.

The lives of many "terminal" liver disease patients were saved by a young doctor Burt Berkson, more
than 30 years ago by administering Alpha Lipoic Acid.  Dr. Berkson went on to become the world's foremost authority on ALA, and wrote a book entitled The Alpha Lipoic Acid Breakthrough: The Superb Antioxidant That May Slow Aging, Repair Liver Damage and Reduce the Risk of Cancer, which we carry at Soothe Your Soul.

ALA is necessary for all energy production in the body and we produce it in our bodies, however as we age, we produce less and less of it, which is why a 2 year old has so much more energy than a 60 year old.

Dr. Berkson's research along with hundreds of published studies by other researchers show that Alpha Lipoic Acid:

May be one of the most important anti-aging nutrients
Prevents cellular damage by neutralizing free radicals
Reduces inflammation
Reduces allergies
Prevents nerve damage and appears to even repair and regenerate nerve cells - a large study of
people suffering from numbness and pain from diabetic neuropathy resulted in as much as
90%     relief after 6 weeks of supplementation with ALA
Recharges other antioxidants, making them useful even after they are spent, such as Vitamin C, E
and glutathione
Is a necessary component for the body to produce glutathione, a potent antioxidant
Prevents and possibly helps to reverse cancer
Reduces blood pressure (especially in combination with acetyl-L-carnitine)
Improves insulin sensitivity and supports health blood sugar levels, as an important factor in
preventing diabetes
Effective in treating diabetic neuropathy, studies have shown significant improvement in
symptoms of diabetic neuropathy, including sensations of burning, tingling, itching, pain and
numbness.  Some theorize that ALA actually helps regenerate nerve tissue.
A key nutrient to prevent cataracts and glaucoma (along with vitamin C and glutathione)
Animal studies have shown ALA to reduce brain damage after stroke and greatly increase survival
rates.
Prevents and/or slows the progression of Alzheimer's and Parkinson's disease
Preserve bone density by neutralizing the oxidative stress that degrades bone density
Protects DNA and RNA from damage
Chelation of mercury, arsenic, cadmium, and lead
Shown promise in reducing inflammation in multiple sclerosis
Is absolutely necessary for life as it's the single nutrient your body must have to transport glucose
into the mitochondria of cells, where cellular energy is produced; without it cells would die.
Unlike other antioxidants, ALA is both water soluble and fat soluble, so it can pass through the
blood-brain barrier, so it increases brain energy, and is able to neutralize free radicals,
preventing damage in your brain, blood, stored fat, your heart, pancreas, kidneys, bone,
cartilage, liver, nerves or any other cell or organ of your body

The greatly increased delivery of nutrients in Lypospheric form, the form of R-ALA that you will receive free just for coming in to Soothe Your Soul, has been scientifically confirmed in numerous studies.

ALA may lower blood glucose levels, so people with diabetes or glucose intolerance should have their blood glucose monitored while taking ALA to avoid hypoglycemia.


By the way, here is an interesting story of how Dr. Berkson started his journey of healing with Alpha Lipoic Acid: As a young intern in a Cleveland teaching hospital, Dr. Berkson was reprimanded by his supervisor for not having any dying patients!

He told his supervisor he was trying to keep people alive. Frustrated, his supervisor assigned him 2 patients that would "surely die", that had acute liver damage from eating poisonous mushrooms. The liver specialist said they could not get liver transplants; there was no hope.

Dr. Berkson decided to talk to the head doctor of internal medicine at the National Institutes of Health, who recommended trying Alpha Lipoic Acid, which he air lifted to Dr. Berkson, who immediately injected it into his patients, and continued to do so daily for 2 weeks. At the end of the
2 weeks, both patients completely regenerated their livers!

Dr. Berkson was so happy and excited, but his supervisors reprimanded him for using a "non-approved" therapy!  Both patients lived into their 80's, some 30 years later. Dr. Berkson went on to treat many other "terminal liver damaged" patients with ALA, with almost all having liver regeneration.

The information provided is for educational purposes only and is not intended to diagnose, prevent or cure any disease.  If you have a health condition consult with your physician.

Lypospheric B Complex Plus 30 Packets