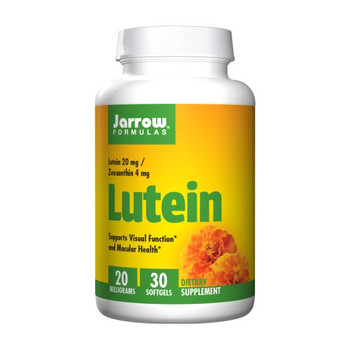 * Enhance Vision and Prevent Macular Degeneration, Cataracts and Eye Fatigue
Lutein is highly concentrated in the macula of the eye with smaller amounts found in the retina, lens and optic nerve. Together with other high potency antioxidants like Zeaxanthin, Lutein helps block out visible blue light one of the major causes of light induced damage to the eyes.

Lutein and Zeaxanthin also help ward off vision loss, specifically helping to prevent macular degeneration by increasing the thickness of the macula. Research has also shown that Lutein can lower risk of cataracts. One study found that older women who have the highest levels of Lutein and Zeaxanthin were about a third less likely to have cataracts.

* Enhance Memory and Cognitive Function
Lutein is the dominant carotenoid in the brain, where it influences visual processing and other neural functions. Significantly lower concentrations of Lutein have been detected in the brains of older people with mild cognitive impairment, compared to those with normal function.

In a study of older women who took Lutein every day, with or without DHA, verbal recall scores significantly improved. And because it enhances visual processing speed, which tends to slow down with age, one of the other brain health benefits of Lutein is boosting overall brain efficiency.

* Protects DNA and Healthy Cellular Regeneration (Promotes Autophagy)
An article in The American Journal of Chinese Medicine suggested that Lutein may induce autophagy (destruction of unhealthy cells) and help shield your body against certain stresses. Lutein is an antioxidant that protects DNA from damage.

* Lutein is found in foods such as green leafy vegetables like kale, spinach, turnip greens, swiss chard, watercress and yellow, orange and red foods like free range pastured egg yolk, raspberries, papaya, oranges and avocados but the amount we get from food may not be enough for optimal eye health and other benefits described above.

* Lutein's benefits are enhanced with Zeaxanthin

Information about Lutein presented here was gathered from articles by Dr. Joseph Mercola and Dr. Julian Whittaker.
The information provided is for educational purposes only and is not intended to diagnose, prevent or cure any disease. If you have a health condition consult with your physician.